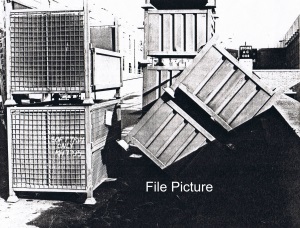 UPVC manufacturer Solarframe Limited has been sentenced for safety breaches after a machine operative was crushed under falling materials.

An agency worker was assisting the driver of a forklift truck in cataloguing and sorting UPVC materials that were stored on long metal frames called ‘stillages’, which in turn were stacked on top of one another on top of a wheeled dolly, Sheffield Magistrates’ Court was told. The FLT was being used to pull out the dollies and stacks and lift each individual stillage down so the contents could be inspected and tidied at the yard in Fields End Industrial Park, Rotherham. The incident happened on 19 July 2017.

The FLT driver began to restack the completed stillages onto a pile on the dolly, when the tips of the FLT forks protruded beyond the dolly and caught underneath the stillages stacked behind it. The stillages became unbalanced and fell on to a 56-year-old worker who was in the yard looking for materials.

He sustained a double broken pelvis, a broken and dislocated left arm, broken ribs left and right side, punctured lung, broken scapula, double broken clavicle, double fractured jaw, fractured cheekbone which involved the eye socket, and two trapped vertebrae in the back of his neck. He was kept in an induced coma for three weeks following the incident.

A HSE investigation found that the company had failed to carry out a suitable and sufficient risk assessment, which identified the risk of lifting equipment making contact with other items located nearby. The FLT in use was too large for the planned activity and the height of the stillages was too great, which presented a danger of them becoming unbalanced. Measures should also have been taken to segregate pedestrians from moving vehicles at the site.

Speaking after the hearing, HSE inspector Jane Fox said: “The worker’s injuries were life changing and he could have easily been killed. This serious incident could so easily have been avoided if basic safeguards had been put in place.

“Assessing the risks involved in work activities allows businesses to foresee what might occur.  It is then straightforward to implement simple control measures and safe working practices.”