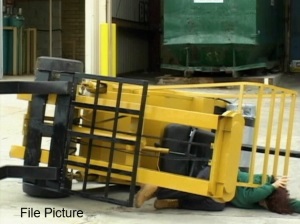 A hazardous waste treatment company has been fined after an employee died when a forklift he was driving overturned and crushed him.

Manchester Magistrates Court heard how, on 3 April 2017, a worker employed by Lanstar Ltd at Cadishead, Manchester died because the company had failed to ensure its forklifts were being operated safely.

An investigation by the Health and Safety Executive (HSE) found the company had not adequately considered the risks of forklifts overturning at its Cadishead site and had not ensured seatbelts were being worn by drivers as necessary – despite it being company policy to do so. The potential for forklift trucks to overturn is well known within industry, as is the use of seatbelts to reduce the chance of injury in the event of an overturn.

Lanstar Limited of Liverpool Road, Cadishead, Manchester pleaded guilty to breaching Section 2 (1) of the Health and Safety at Work etc. Act 1974. The company was fined £126,000 and ordered to pay costs of £17,664.

Speaking after the hearing, HSE Principal inspector Ian Copland said: “This incident could so easily have been avoided if the driver had been wearing a seat belt as per company policy. However, because the company did not fully appreciate the risk of an overturn, management failed to instruct and supervise their drivers properly. This resulted in seatbelts not routinely being worn by forklift truck drivers on site.

“HSE hope that this case helps to communicate important messages for employers to properly assess risks and put in place appropriate controls.”