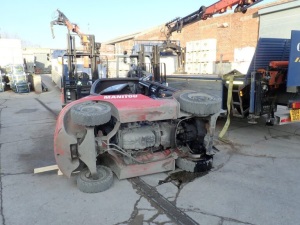 A building supplies firm has admitted breaching health and safety standards over the death of an employee who was crushed by a forklift truck.

Chestnut Building Centres, of Picton Road, Wavertree, was fined £94,500 for not maintaining on-site health and safety standards which resulted in the death of 62-year-old Robert Ambrose. In addition to the £94,500 fine, the firm was also ordered to pay investigation costs of £66,025 awarded to Liverpool City Council.

The incident happened on 15 November 2018, when the forklift truck Mr Ambrose was driving toppled over after a delivery lorry made contact with it, trapping him underneath the truck. He sustained serious injuries and died in hospital a few days later.

An investigation undertaken by Liverpool City Council’s Environmental Health Officers (EHO) found a series of health and safety failings at the Picton Road builders merchants. Most noticeably, that forklift truck operators routinely did not wear seatbelts/restraints which would prevent the operator from being thrown out of the vehicle in the event of an overturn.

The investigating officers also found there were risks posed by a lack of proper management of delivery vehicles and the unsafe movement and poor separation of vehicles and pedestrians at the site.

Chestnut Building Centres Ltd had pleaded guilty to the breaches at an earlier hearing at Liverpool and Knowsley Magistrates Court on the 11 November 2021.

Mr Ambrose had been an employee of the company for more than 40 years and was due to retire in March this year.

Liverpool City Council’s Cabinet Member for Neighbourhoods, Cllr Abdul Qadir, said: “This is a dreadfully sad case and I thank the environmental health officers for their dogged determination in getting this case to court.

“Quite simply, this should never have happened. Nobody should ever go to work and not go home and it is the responsibility of all businesses to ensure they are doing everything in their power to ensure health and safety regulations are adhered to at all times.

“I’d like to express my deepest sympathy to Mrs Ambrose and her family, and we hope bringing this business to justice provides them with some comfort at this incredibly difficult time.”

In court, District Judge Hatton said: “This is an awful case in the most tragic of circumstances and nothing can be said to ease the pain of the family and friends. Robert Ambrose was a valued and respected member of the company. The incident was avoidable and shouldn’t have happened. There was a basic failure to manage risk as vehicles interacted with pedestrians and there was a casualness about vehicles in the yard. I must impose a fine so casualness doesn’t creep in through the backdoor.”

This article was first published in Liverpool Express