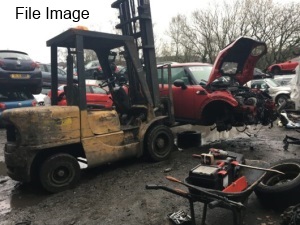 A motor vehicle scrap company and a director have been fined after a worker suffered crush injuries in an incident involving a forklift truck.

Cambridge Magistrates’ Court heard how on 1 March 2021, an employee of Queensferry Car Breakers Limited was injured when he was hit and run over by a forklift truck driven by his employer Ghol Mohammad Navabi. The forklift truck was being used to transport engine parts from the scrap yard up a loading ramp into the back of a metal container.

Whilst Mr Navabi was inside the container, he asked the worker to collect a car bonnet. The worker left the container and walked down the ramp returning quicker than Mr Navabi expected. As he was walking back up the ramp Mr Navabi reversed down it and ran over him, which resulted in multiple fractures to both his legs.

An investigation by the Health and Safety Executive into the incident found that the forklift truck had not been adequately maintained, had no working foot brake, no working hand brake and the steering was defective. There were no measures in place to segregate pedestrians and moving vehicles and the company had no employer’s Liability Compulsory Insurance.

Sole director of Queensferry Car Breakers Ghol Mohammad Navabi pleaded guilty to breaching Section 2(1) of the Health and Safety at Work etc. Act 1974, by virtue of Section 37(1). He was given a 20 week prison sentence suspended for 12 months, including 15 rehabilitation activity requirement days, 180 unpaid work hours and ordered to pay prosecution costs of £3,923.

Speaking after the hearing, HSE inspector Emma Page said: “This incident could have easily resulted in a fatality and could have been avoided by simply carrying out correct control measures and safe working practices. “This risk was further amplified by the company’s failure to undertake a number of safety measures including segregating vehicles and pedestrians.”