Centre of Gravity of a forklift truck's load explained

Many people are confused by the expression "centre of gravity". Put crudely it is a point on an object which is in the exact middle of the object. That may not be true because it depends upon the shape of the object. When talking about forklift trucks and their design specifications we tend to think of a homogeneous load. In other words, similar to the one shown above which, excluding the pallet, is 1000 mm wide, 1000 mm, long and 1000 mm high. 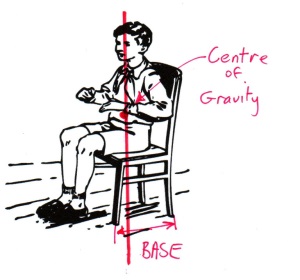 As mentioned on this page, when a forklift truck is being designed, it is assumed that the load will be a 1000 mm cube and therefore the distance from the front face of the forks to the centre of gravity of the load will be half that: 500 mm.

Of course, not all loads are of a uniform shape and forklifts carry an enormous variety of shapes of loads in the real world. It is for this reason that forklift operators are taught to try and carry loads so that they are hard up against the front vertical face of the forks, (sometimes referred to incorrectly as the heel of the forks).

Where a load is non standard in shape, the forklift operator should be given specific job training on how to handle it as described in the Approved Code Of Practice. This is in addition to any basic training the operator may have received.

It should also be noted that having a gap between the front face of the forks and the load can lead to the truck tipping over in a forward direction. That is why this fault is penalised on a forklift truck operator's test.