Isolating the telehandler during stacking 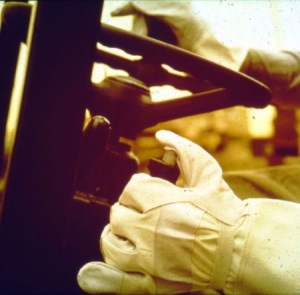 The British Industrial Tuck Association produce a booklet on fork lift truck usage. In their rough terrain training booklet it states the following.

This is similar to a counterbalanced machine where the handbrake is applied and neutral engaged when using the hydraulic controls.

The problem with rough terrain machines is that, by their very nature, they will probably be used on rough ground and following this rule all the time is not practicable. Some machines, including the one I have used to depict the stacking sequence, have an "inching" control which overrides the handbrake and neutral position allowing the truck to move in small increments even while the operator is using the hydraulic controls. This is often fitted to the same lever that is used to operate the hydraulic controls. (Referred to a couple of slides ago).

It is, quite obviously, not possible to apply the handbrake and engage neutral whilst trying to get the forks into a small space such as the holes in a pack of bricks for example.

I don't know the answer to this but during my training days I used to insist that the brake was applied and neutral engaged when raising or lowering the forks/load but for operations where it was not practical to do this, such as trying to get the forks into a thin pallet, I would ignore it for test purposes.

If anyone can clarify this please contact me. Meanwhile throughout the following slides, "stop the truck" means apply the handbrake and engage neutral if it is reasonably practicable to do so.

January 2017. This explanation about the handbrake is the best I've ever come across and well worth a read. It was written by the man who invented the UK forklift truck training course and practical test.

Next Slide
Disclaimer. The legislative information contained on this web site is my interpretation of the law based on many years in the health and safety business. A definitive interpretation can only be given by the courts. I will therefore not be held responsible for any accident/incident/prosecution arising as a consequence of anyone using any information obtained from this web site.