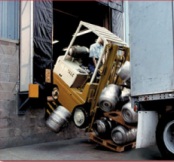 The really good news is that fatal accidents involving forklift trucks in the United Kingdom have decreased over time. In the year to April 2013 there were only six fatal accidents which, although too many, is much lower than the 30 annual deaths that were reported annually when I started in the forklift industry in 1970.

Some of the more recent forklift accidents that have come to my attention are listed below and I will update these on an ongoing basis.

Note: Links to older accidents were removed during the website update Sept 2020

November 27th 2020. A construction company has been fined after a young employee suffered injuries when assisting in moving a load of timber with a telehandler. Read More

November 26th 2020. A coroner's court has heard that a Dereham teenager died after a crush injury from a farming incident involving a forklift. Read More

October 30th 2020. An agency driver was carrying out a delivery for Reason Transport UK Limited at Fraser Road, High Wycombe and was killed when the load fell on him. Read More

February 10th 2020. A waste management and packing company has been fined after a worker was struck by a falling bale of compacted waste paper. Read More

January 27th 2020. Director sentenced after multiple offences involving the use of a telehandler. Read More.

January 23rd 2020. A Carlisle auto-salvage company was fined after a customer was trapped and fatally crushed when a lift truck he had purchased was being loaded onto his own recovery vehicle. Read More

January 20th 2020. A PARCEL carrier has received a six figure fine after an employee was seriously injured when he was struck by a fork lift truck. Read More

January 6th 2020. A plastic packaging manufacturer has been fined after an accident at its site resulted in an employee suffering multiple fractures to their pelvis and legs. Read More Disclaimer: The legislative information contained on this web site is my interpretation of the law based on many years in the health and safety business. A definitive interpretation can only be given by the courts. I will therefore not be held responsible for any accident/incident/prosecution arising as a consequence of anyone using any information obtained from this web site.