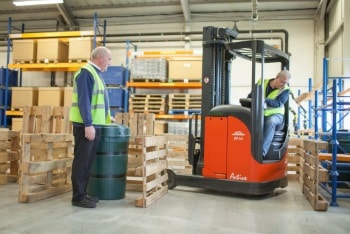 Towards the end of 1999 the RTITB decided it would be a good idea to introduce a new, updated test for the new millennium. They produced a different version of the old practical test along with more questions for the theoretical paper. I was one of eight instructors in the country who were asked to use this test on an experimental basis for the last three months of 1999 and report back to the RTITB, our feelings about it and the feelings of our trainees. As a consequence some minor changes were made but not many. The most significant change to the practical test was that operators now have to negotiate the chicane laden, twice during the course of the test where was previously it was only once. Some changes were made to the penalty points system on the marking sheet, (some of which I can't understand even to this day), but it was generally recognised that the new test was an improvement over the old one and this test should be used by all five accrediting bodies. Use of this new test for all forklift training courses came into force in April 2000.

In 2006 the RTITB introduced the National Operator Registration Scheme, known as NORS. Nowadays operators who successfully attend forklift training courses are placed on this database which is held by the RTITB. Each operator is provided with an identity card, about the size of a credit card, which includes their picture along with a description of the truck(s) they are qualified to operate. Registration on this database lasts for three years after which point the RTITB writes to the operator at their home address advising them that they need a refresher course.

There is an urban myth that it is mandatory that every operator to be retested every three years but this is not correct. There is no legislation in fact, which specifically states how often an operator should be retrained but because of the three year period specified in the NORS scheme, three years has become the accepted time frame for retraining and the re-testing of operators. It is fair to say that, with all the changes made over the years, forklift training has finally come of age.

A new test for forklift operators was introduced in September 2017 and this consists of three parts. Complete details can be found here.

Back to the start of forklift training history>>

Disclaimer: The legislative information contained on this web site is my interpretation of the law based on many years in the health and safety business. A definitive interpretation can only be given by the courts. I will therefore not be held responsible for any accident/incident/prosecution arising as a consequence of anyone using any information obtained from this web site.